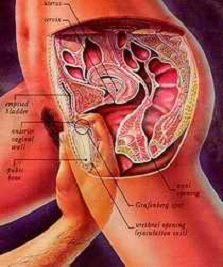 The Skene’s Gland is the female counter part of the male prostate and is smaller than the male prostrate. It is situated the anterior wall of the vagina, in the vicinity of the lower end of the urethra in the general area of the vulva and has many names such as the lesser vestibular gland, paraurethral gland, periurethral gland, the U-spot or G-spot. It is about 2 to 3 inches from the entrance of the vagina. The Skene’s gland is embedded with tissue, part of which includes the clitoris, that reaches up inside the vagina and during sexual arousal it swells with blood.

Studies have demonstrated that a large amount of fluid can be secreted from the Skene’s gland when stimulated from the inside of the vagina. The liquid produced by this gland is definitely not urine (as has been suggested) but a thin consistency fluid which contains glucose and prostatic acid which is much the same as the genetic make-up of semen… without sperm. The fluid is produced during sexual arousal, when the Skene’s gland is stimulated in a certain way for it to release these secretions, where ultimately it is expelled through the urethral opening. The release of the fluid is entirely separate and unrelated to normal vaginal fluid produced during sex, whose primary purpose is to lubricate the vagina. The Skene’s gland has had reports that showed that female ejaculation lead some women to seek medical advice and in some extreme cases undergo surgery to avoid any more unnecessary embarrassment.

Out products are a safe and effective ©viagra alternative.